Summary:
A young man, in psychological shock, wanders aimlessly through the streets of Athens. He is persecuted by guilt and a mysterious female presence. When he returns home, the memory of the murder he had to commit will lead to another tragic decision. But will this be the end or just a new beginning?

Watch the film Behind the Clouds at Big Bang

Behind the Clouds – Making of: 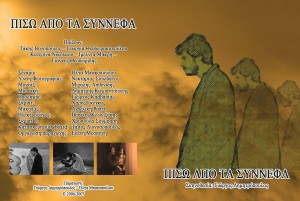 Photo album – Behind the Clouds